Who Are The Medical Refugees, are they real 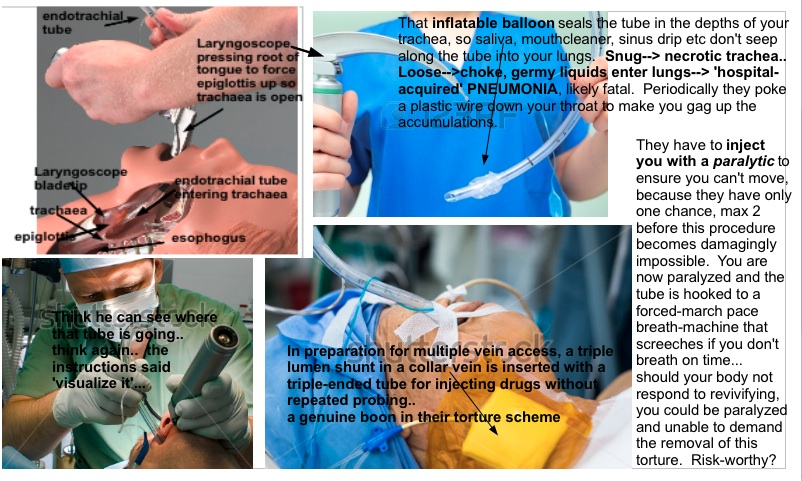 Who are the Medical Refugees and Rescuers? We are among them...

We are told how marvelous and ingenious are the systems that U.S.medicine offers us. Yet the statistics don't support that image, yet the image persists and multiplies. But we'll let the statistics tell their own story (right in the Journals of the American Medical Association, among many sources). And we'll offer instead a graphic demonstration that moves us to turn our backs on hospitals, insurance and run elsewhere.

Frankenstein is the moving force in those places. Snake oil chemical industries drive a cadre of adrenaline junkies crushed through medical training and unable and unwilling to be Hippocratic. Plus a subpopulation of adherents whose allegiance is to foreign political agendas that reduce patients to laboratory specimens. First do no harm and let food be your medicine and medicine your food are maxims that claim no real adherents IN THE HALLS WHERE THE CURRENT U. S. STANDARD OF PRACTICE IS PREACHED AND IMPOSED ON PATIENTS.. The outgrowing monstrosity is recognizably frankenstein's creation.

Picture breathing hard with little comfort. Acute respiratory distress it's called. Could be Pneumonia, could be Sepsis. Seek safe haven in one of the hallowed hospitals? Call 911? What is coming your way? Brace yourself to be made paralyzed, tortured and horribly machine driven mad.

It's called INTUBATION. The photo collage above is the reality:

And yes that is the real 'laryngescope', yes forcing your airway (aka trachea) open to push a tube down to nearly where your airway branches into your lungs. Ahd yes the process is so dangerously ghastly that they inject a drug into you that paralyzes you, and hope that at the end they will be able to undo it and all the risks and harm it implies. And yes, for the duration of the tube's residence in your airway, you tread the narrow edge between your airway becoming 'necrotic' (black dead tissue) from a fit too snug, or becoming a victim of 'hospital acquired pneumonia'. likely fatal... so which do you want to die from...

And lest you think this 'benefit' of western medicine and insurance is my exaggeration...
LOOK AT WHAT MEDICAL TEXTS AND DOCUMENTS INSTRUCT TO KEEP THEIR ADHERENTS PRIMED TO DO TO YOU.... brace yourself for hair-raising instruction excerpts..... 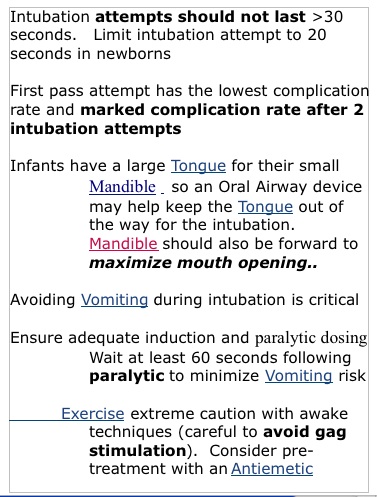 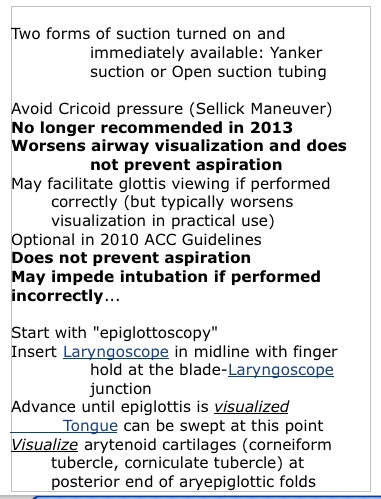 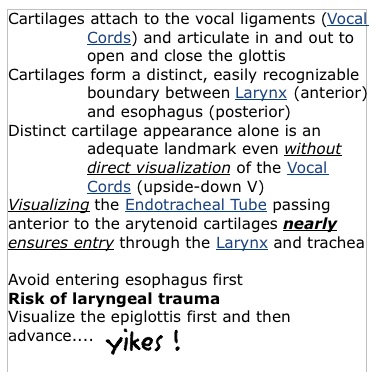 Insanely reckless ! And yes that last 'instruction' was ours, not theirs... but clearly 'Something' happens to hippocratic priorities when learning in current medical schools and realizing that some horrendous surgery is unavoidable. Clearly surgery is not something to be sanctified as unavoidable and when the patient's body is already fragmatized, the need for surgery is a boon to reassemble what is torn. That horrible prospect triggers the adrenaline and the kick induces less avoidance of harm (necessarily for some) and for all there's more tolerance of harm, even pride of distinction that becomes extended to reckless drug use which evilly is the favored opening funded by the chemical industry in their structuring of medical training, ending hippocratic principles. A few escape.

The instructions go on.. etc for another terrifying 9 or 10 frankensteinian nightmare pages of special circumstances of patient physical variability, and alternative ideas of hyper-this and traction that, and even more frightful instructions on what to do in ERRORS and FAILURES. And you hope that they've covered them all....

So do you know, did your attending MD get the update that discontinued the previous method? and remember it's advisory among the reams of documents coming through his door on what drugs are favored this year to be disgracefully recalled the next year after people BEGIN to realize what's happening...

And recognize all the real blind attempts in the process (just based on VISUALIZATION of where YOUR body's this and that are) and all in order to do something that your body would recognize as so detrimental that they inject a PARALYTIC DRUG into your already suffering fragile body to prevent your body's sensible reactions.

How many damaging drugs and tricks do these gamblers use to get their adrenal kicks?

So do you really believe that you would choose such a financially INSURED 'benefit' of the current 'standard of practice' instead of your life simply being SAVED from your initial hazard by resting quietly in a translucent chamber (rather Star Trekky) with your injected medical dose of C circulating through your system while the pressured oxygen dissolves into your plasma as you breath calmly to supply what the anti-oxidant double-teams up with.....

One clinical protocol published as exploratory that consistently saved septic shock patients consisted of monitoring patient heart rate and whenever it rose to 120 bpm, the patient was given an hbot treatment of a frequently used duration and pressure (like an hour at 1.5 atmospheres). In between episodes, rest and further progress was possible in all cases. Hospitals have nothing remotely hopeful to compare for septic shock patients. The patients die. How can the sane not choose to reject further entrapment in 20th century medical institution involvement. Choose to be a Refugee.. or even better a Rescuer .

No, not just a sci-fi fantasy Star Trek escape from 20th Century barbarism like inspired the movie ( Star Trek 4, The Voyage Home ) whose understated portrayal sorta slid past censorship. 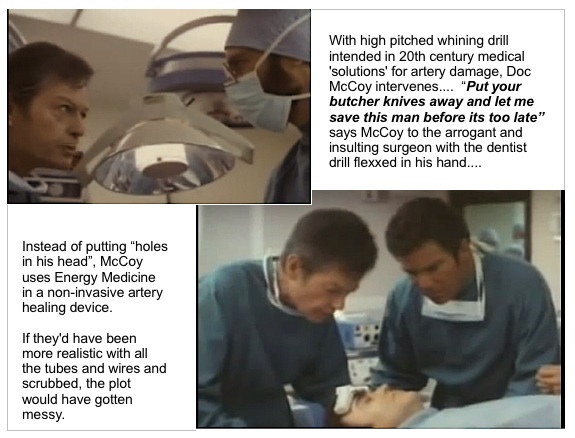 See our local hospital Sechrist with the manufacturer's intended usage as a verified example. What would qualify as 'first do no harm'...? The sechrist or intubation. Be my guest.... 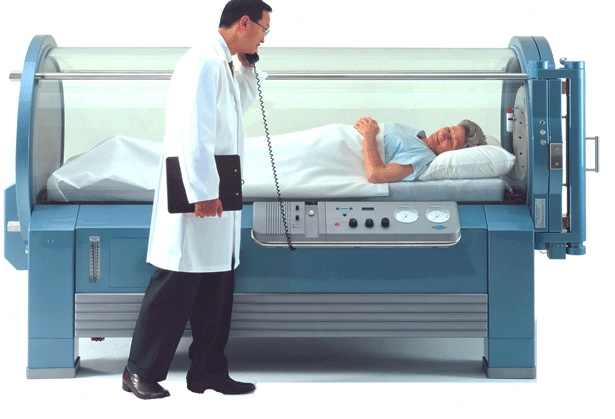 'First do no harm' practitioners would have immediately dosed that patient with intramuscular vitamin C as part of their orthomolecular first move, since it enables more oxygen to enter cells, among many other emergency uses for C.

Every bit of ORTHOMOLECULAR medication is BY DEFINITION selected and researched because it CONTRIBUTES WELLBEING THAT **MATCHES** YOUR BODY'S OWN PROGRAMMED PROCESSES AND CHEMISTRY in order to favor the body's natural NEEDS AND STRATEGIES, none is given to defeat what your body is trying to do to survive... Such 'follow the body' thinking is seriously UNLIKE THE CURRENT STANDARD OF PRACTICE IN FDA/AMA MEDICINE..

So which one do you WANT to care for your DIRE NEEDS in the recognizable EMERGENCIES.. 'heroic' adrenaline games and snake-oil medicine (all with immediate unwanted side effects as well as long term damaging consequences) all inflicted with EVEN MORE DIRE RELATED TORTURE FOR YOUR ALREADY STRESSED-OUT-OF-ITS-MIND POOR BODY STRUGGLING TO SURVIVE..

Look at the real world of what IS KNOWN AND PRACTICED IN JAPAN AND RUSSIA, and knowably adoptable here if it would profit the evil snake-oil chemical industry...

This one is one of our own recovery room softsided chambers, now in service for our own health wellbeing because we are choosing refugee status.. 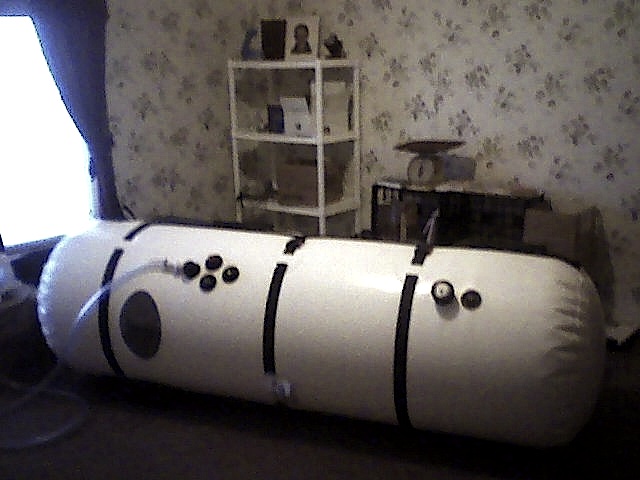 There are even hospitals there in Japan where the patients are sleeping in softsided hbot chambers at pressurized levels of purified air..

THIS IS NOT WISHFUL THINKING... WE ARE SIMPLY BEING DRUGGED TO PROFIT OLIGARCHIC POWERS AND THEIR CORPORATE INDUSTRIAL FINANCIAL WELLBEING..... supported by MAJOR PROPAGANDA of government and major-donor industry conflicted flimflamming and administered by brain-propagandized adrenaline junkies indoctrinated to collect huge fees to sanctify their junky-highs as heroic and their licensing as 'high' knowledge beyond lowly patient appreciation which reduces the patient to practice-dummy

Look at the two methods of caring for your body in its dire hazards and realize that the research, which we shall begin adding to these pages says that THE WISHED FOR hippocratic CARE IS SUPERIOR IN ITS RESULTS.... so stop wishing and start shopping for your own RECOVERY ROOM in your own HOME (like Japan) because in the current U.S.'s governing hierarchies, you do not have any hope but YOUR OWN CHOICES TO SAVE YOUR SOUL AND BODY AND THOSE OF YOUR PRECIOUS FAMILY MEMBERS...

Best to you always.... ttyl, promise as we progress to forming a club, maybe, to protect our medical choice freedom and access. You may wish to do the same, or not.